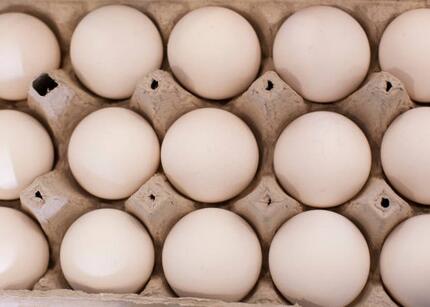 Are people having lengthy discussions over how to remove eggs from the carton on Twitter? Yes, they are.

Have you ever watched the television show "Monk?" He's a former police officer who after the tragic and unexpected death of his wife, became engulfed in multiple phobias and an intense obsessive-compulsive disorder. Not that those are things to joke around about but I do think, although I've never been medically diagnosed, that I have a touch of "Monk" in me!

When putting things away in my pantry, all the cans, jars and boxes need to have their labels facing in the same direction so I can see exactly what I'm looking for.

Laugh if you must, but papers can't just be tossed on my desk. I need them to be neatly stacked and perpendicular to each other.

And I don't dare step on a crack in a sidewalk. Arrrghhhh!

Well when I saw that people on social media were actually discussing the "right" way to remove eggs from cartons, it was then that I realized my "Monkness" kicks in over this same simple task!

There are four main beliefs:

1. Remove the eggs from left to right.

2. Remove the eggs from right to left.

3. Alternate the sides by removing eggs to keep the carton balanced.

4. Be daring and remove the eggs randomly or from the middle of the pack.

Which way do you remove your eggs from the carton? I'm all about belief #3! And you know what? That seems to be the most common choice. It just makes sense, doesn't it? Remove two eggs at a time from opposite sides so that the weight of the eggs that remain the carton is centered. This way, no matter how anyone may open the fridge and grab the carton, it should be balanced so that not a single egg falls out onto the floor!